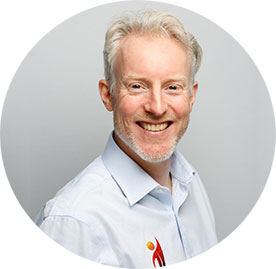 From an early age, Paul was always interested in how to achieve optimal health rather than simply avoiding being sick and with a keen interest in science, Paul knew early on that Chiropractic was the right career path for him.

Paul moved to the UK in 1998 and quickly established himself as a leader in the UK profession through his involvement in the United Chiropractic Association.  Winner of the UCA “Chiropractor of the year” award in 2010, Paul  is  also  the  President  of  the  association  and  heads  the peer  &  ethics  committee  which  allows  him  to  fulfil  his  passion  for  helping other chiropractors in the UK practice safely and ethically. Paul now regularly takes time out from the practice to serve as an expert witness to help other Chiropractors with regulatory cases.

As a father of two, Paul has a special interest in how Chiropractic can help mothers throughout pregnancy and in the important role of Chiropractic care in babies and children. He is a certified practitioner in Webster technique which can assist women with pelvic alignment in pregnancy.

On  a  personal  front,  Paul  loves  to  exercise  and  is  a  keen  endurance  athlete having  run  in  10  marathons and countless triathlons.  He loves cycling and completed the having  completed  the  Paris  Brest  Paris twice  (a  mere  1200km  meander  across France!!) He also loves skiing and worked as a ski instructor for a couple of seasons alongside his chiropractic studies. He met his wife, Charlotte through a running club whilst on a ski  trip  to  Colorado  in  2011  and  they  live  in  Hertfordshire  with  their  two boys Charlie and Henry.

Paul’s advice to everyone is:

COVID-19 Update – We are Open Find out more