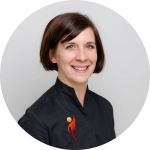 Charlotte worked in the financial services for 16 years before joining forces with Paul in 2016. She realised after returning to the financial world after becoming a mother that it was no longer the right profession for her and now loves working in the practice as she loves to see miracles happen on a regular basis.

Charlotte has been passionate about Chiropractic since she met Paul in 2011 and started getting regularly adjusted as she was regularly running marathons and competing in triathlons at the time and was often getting injured. She did not know anything about Chiropractic before but now truly believes that Chiropractic changes lives! She has attended many Chiropractic conferences and is now well versed in the many benefits of living a Chiropractic lifestyle.

Charlotte has a keen interest in nutrition and enjoys cooking healthy meals for her family and sometimes brings in tasty nutritious treats in to the practice.

Like Paul, Charlotte is a sports enthusiast and has competed in several marathons, triathlons and cycling events and recently competed in a Half Ironman in Majorca in 2019. She has a passion for music and also plays the concert harp and piano when she has time which is not very often these days!

COVID-19 Update – We are Open Find out more